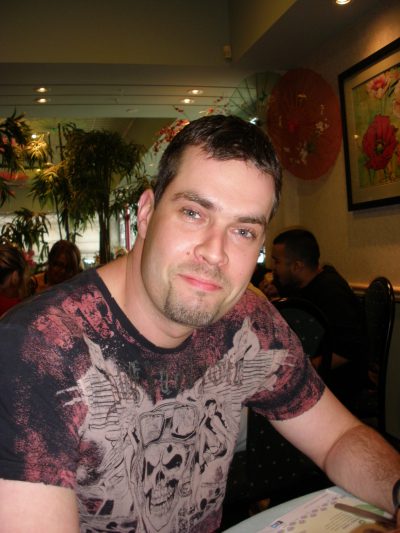 It comes with heavy hearts and great sadness that the family of Chris Thompson announces his sudden passing in his sleep on August 14. 2021 at his apartment in Toronto. He had just turned 40 years at the end of February of this year, so young to have left us already. It still seems so surreal to those who knew him.

Chris was the beloved and only son, born February 28, 1981, in Scarborough, ON, to (late) William (Bill) Thompson and (late) Hilde Thompson (Stier).

Chris always lived in the Toronto area. He grew up in Scarborough, and then as a young adult lived in various locations in the City of Toronto itself.  Growing up Chris played baseball and participated in the Martial Arts, earning his Black Belt in Shotokan Karate. He even went on to partake in some MMA tournaments.   All sports, but especially football, were a favorite pass time for Chris. Whether going to live games or watching them on TV with his Dad and friends, he was always an avid fan. Chris was very creative and the arts were a large part of his life. His biggest artistic love was music.  It was something he enjoyed creating and experiencing. Chris loved going to live concerts when he could. He also played guitar and formed bands with friends and fellow music lovers. They performed at various small venues in and around Toronto. Additionally, Chris was an abstract painter. He hung his work around his apartment and shared his pieces with friends. Chris was a big kid at heart. He enjoyed being the playful one with the younger kids. In the pool he was the official “flying fish” launcher and a competitor in the cannonball competitions. He was the first to suggest sleigh rides down the hill, and adventures in the park.

Chris was very much a “people” person.  He worked in the hospitality industry both as a server and bartender, and in this field, it was definitely a perfect quality to have. He met many endearing friends in this venue. Chris always had a big heart and was quite willing to help whenever he could. Generous to a fault at times but he never saw it that way.

Chris is survived by his loving Aunts and Uncles, many Cousins and numerous Second cousins. He will be dearly missed and forever remembered by family, extended family and friends.

Cremation has taken place.  Interment will be with immediate family.  If desired, in lieu of flowers, memorial donations can be made to The Heart and Stroke Foundation https://www.heartandstroke.ca or Canadian Cancer Society https://support.cancer.ca .

A tree is to be planted in remembrance of Chris and his parents in a Scarborough park this spring.