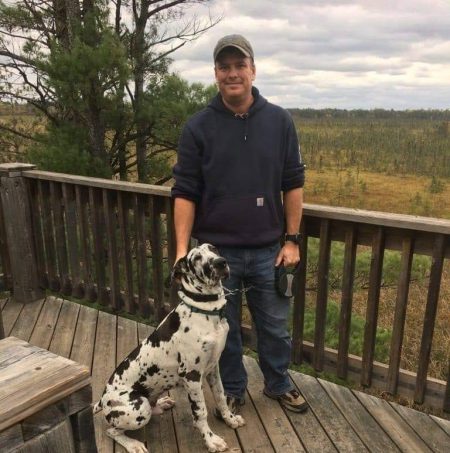 Funeral Details: A private celebration of life will be held at a later date

It is with heavy and broken hearts that the family of Craig Bagshaw announces his sudden death on July 6, 2021 in Alban, Ontario at the age of 43.  Craig’s loving companion Baxter, his beautiful Great Dane, has left this world with him.

Craig was born in Sudbury, Ontario.  Cherished son of Pat and Jim, dear brother of Lyndsy (Shane) and loving uncle of Carson, Brooklyn and godparents, Dale and Val.  Craig will be sadly missed by many aunts, uncles, cousins, relatives, friends, co-workers and our Family HH gang.  All spoke so highly of his kindness to help others in need and his loving heart that he had for everyone.

Craig was his mother and father’s heart, soul, pride & joy and will be deeply missed. Craig was considered a genius by many family members and friends when it came to technology.  He also had an incredible gift of knowledge when it came to a lot of various topics and always sounded like he knew what he was talking about.  You always felt like you learned something new after every conversation with Craig.

There was never an issue he could not resolve.  It all started when Craig was 12 years old and read the DOS manual (disk operating system).  He also drove his mother crazy taking apart computers, walkmans, watches, clocks, and anything else that had a mechanical component, to figure out how they worked; his closet floor was always a heaping pile of parts and cords.

As most of his close friends knew, Craig had a hearing problem, he wore hearing aids from the time he was 5 till around 12, then because it wasn’t cool anymore, he decided to stop wearing them.  From then on in he drove us all crazy by talking way too loudly and, you had to repeat everything at least twice.  Craig also played the keyboard by ear, he would listen to a song a few times, then before we knew it, he was pounding out the song on the keyboard.  He used to keep our Happy Hour gang dancing to his music till the wee hours of the morning.

Craig was a Senior Technology Consultant with Telus, he loved his job and was very proud of what he did.  His first job with Telus was working on the DND (Department of National Defence) contract.  He was a very patriotic Canadian and he considered it an honour to be able to solve a lot of their technical issues.  He NEVER quit; he always found a solution to whatever he was working on.  Many a time he worked through the night to resolve the issue.  He loved working with all of the team members at Telus; they were more than co-workers; they shared an amazing friendship together while completing some very complex projects.  At the same time, they enjoyed some laughs and had fun finding the solution; they worked so well together; he will miss them all.

He had that same mentality when completing projects around our cottage or fixing a boat motor.  In the last year, he built a complete boiler system at our cottage providing heat so that we could come here earlier in the Spring and leave later in the Fall.

Craig moved to Barrie where he could be closer with Lyndsy and her family. Many memories were made with trips to Florida and times shared at the cottage.

He loved spending special time with his nephew Carson and his niece Brooklyn.  He often laid on his bed with them and Baxter watching old Looney Toons, Woody Woodpecker, Bugs Bunny, etc.; he was a big kid at heart.  He always wanted to make sure they shared experiences together, whether it be taking them for a boat ride or throwing them into the pool.  His heart was so strong for them.

In lieu of flowers, anyone wishing to donate can do so by clicking on the following link www.georgiancollege.ca/giving

A Legacy Scholarship, in Craig’s memory, has been set up with Georgian College in Barrie.  Funds raised will support students entering into the Honours Bachelor of Science in Computer Science Degree with Computer Programming Diploma.

His memory and kindness will continue to live on forever.

A private celebration of life will be held at a later date.