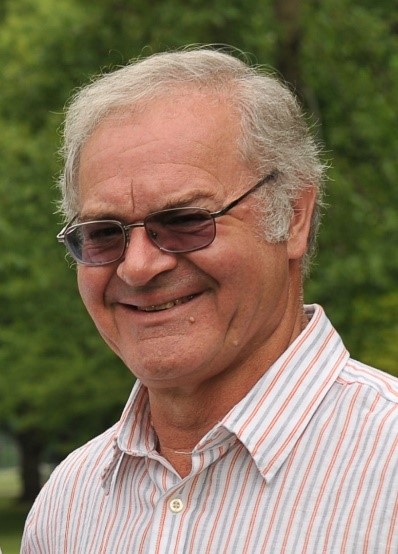 David Fawcett Steele passed away peacefully on the evening of Thursday, February 21st.  The following words titled “An Adventure Ending in Innisfil” were written by David in 2018 and encapsulate his great passion for the area where he spent over 40 years.  They are a great summation of his life; not just what led him from Simla India, to England, to Quebec and finally to Innisfil, but also his great love of writing, sport, education, history and glimpses into his dry British wit.

David was of course, far more than what’s written below. He was a devoted and loving husband to Candace and a pillar of strength and exemplary father to his 2 sons, Robin (husband to Jayme) and Nick (husband to Sherri).  To his 4 grandchildren, Teagan, Rhian, Parker and Piper, he will always be remembered as “Goofy Gumpa”.

He was also an all-around athlete, a craftsman who was a master of a bit of everything and an educator.  A lover of good books, cryptic crossword puzzles, Persian rugs, British dramas (and comedies), clocks and day-old tea.  A keen intellect with a great sense of humour who could find something silly in just about any situation; even if at his own expense.  David was a kind, gentle, ethical and extraordinary man who has touched many people’s lives.  We loved David deeply.  He will be missed greatly and remembered fondly.

An Adventure Ending in Innisfil

A rather long and winding journey led me, David Steele, my wife Candace and two boys, Robin and Nick to settle in a heritage house near Churchill in 1981.

My ancestors were German and lived in and around Solingen in Germany.  In the 1700’s, one of them became the mayor of Freudenberg, a small village in the area.  Many of my forebears worked in or had connections to the steel making industry in that part of Germany – hence our original name of Stahlschmidt or steel smith.  The family crest of the time shows a workman hammering away at a piece of steel on an anvil. Many of the Stahlschmidts left German for England in the 1800’s, a fact attested to by my collection of “Andenkenkarten” or cards of good wishes which were given to the departing emigrants so that they would not only have good luck in the new country, but were tokens by which to remember various family, relatives and friends. However, during the First World War, it was not a good idea to have a German name in England, so my grandfather had the family name changed from Stahlschmidt to Steele, adding the final “e” to remove the connection with steel workers.  He also “updated” the family crest: the steelworker with a hammer was transformed into an armored knight wielding a battleaxe!

The family did well in English. My grandfather was an actuary and also a missionary in India.  The Indian connection was maintained by my father and by my mother.  She was sent out to India when she was 20 in order to find a husband – part of what was known as the “fishing fleet”.  She found my father (or the other way around) who was serving as a British officer in the “Indian Army” in Simla – a town in the foothills of the Himalayas which was a popular retreat for officers to escape the heat of the plains in India. (Women who failed to find a husband in India were known as “the returned empties”!!)  My mother married my Father in a church in Seaview, on the Isle of Wight on a return visit to England.

I was born in Simla in 1941, and my brother Mark in 1942. Apparently, I became fluent in Urdu and was the official go-between for my mother and the Indian “servants”. (Unfortunately, no vestige of that Urdu now remains in my brain!)  My parents’ marriage did not last however, and my mother and the two of us returned to England in 1946. We stayed at first with my grandmother in her cottage off Kensington High Street.  About a year later, at an auction sale, my mother bought a huge Victorian artist’s studio with a small interior balcony (for a bedroom) at one end and a passageway over a built-in coal bin around a central courtyard leading to a kitchen at the other.  We lived in this studio while we were growing up.  However, for me, most of my early years were spent at Haileybury, a private boarding school in Hertfordshire.  There I developed a love for most sports: rugby, squash, tennis and swimming and became quite proficient in them.  I hated cricket however, until I discovered more action if I became a wicket keeper!

At the end of school, I was eighteen years old and had no idea what I wanted to do.  It was lucky that my mother’s brother had also been sent out to Canada when he was 18 and had become a successful engineer and had been working for the Canadian International Paper Co. designing paper mills.  He suggested I come out to Canada for the summer and he would find me a job.  So, in September 1959, being totally “green”, I embarked on an empty paper boat – one that had dropped off its cargo, rolls of newspaper, at Liverpool and set sail with one other passenger for Canada.  On arrival in Quebec, the customs officer asked what I was going to be doing in Canada, and I said I was going to work.  This was not well received as I had no papers or anything, but with my uncle’s intervention, I was eventually allowed in as a landed immigrant.

We drove to La Tuque in Quebec since that was where my uncle was working on the paper mill.  Two days later, I was driven into the middle of nowhere to a logging camp since my uncle had procured me a job as an “assistant scaler”.  The camp was of the old kind, built of log cabins of various sizes.  I only had my Haileybury school clothes with me, and when I walked in the dining room, all conversation stopped, and I was gaped at open mouthed.  My job was to follow the scaler who had to measure the piles of wood that individual loggers had cut in order for them to be paid.  I had to mark each of the logs and to record the measurements so that payment could proceed.  I trudged around during the whole of that winter through snow drifts deeper than I had ever seen before.

During this time, I decided I would stay in Canada in order to go to University since at that time University was not free in England, and I knew I could pay for a good portion of my fees from summer work if I stayed there.  I was accepted at Queen’s University (where my uncle had gone) and was even paid a substantial sum in scholarships!

From 1960 to 1964 I studied English at Queen’s, got my BA, and actually won the gold medal for leading the year in that discipline.

One outstanding summer job was as a member of the Fort Henry Guard.  I joined up in the winter of 1962 in order to train for the Guard’s visit to the Royal Tournament in London, England the following year.  As a bunch of University students who had no real military training, we were made welcome by Londoners and other military groups in this festival of military activities.

After Queen’s, I pursued my studies at the U of T in 1964 to 65 gaining an MA in English.  The next year I spent at the Ontario College of Education working to achieve a Teaching Certificate.  Getting a teaching position in 1966 was very easy; there was a lack of teachers and several hiring “fairs” were held in downtown Toronto Hotels.  I began my teaching career at Humberside Collegiate.  Perhaps the highlight of that first year of 1967 was going on a student trip to the World’s Fair in Montreal.  Thereafter I taught at Oakwood Collegiate, became assistant head of English at Lawrence Park Collegiate, Head of English at Danforth Technical School and ended up for many years as Head of English at Oakwood (whose retired teachers continue to meet twice a year for lunch in Toronto.)

During these years, Candace and I owned two different houses in the West end of Toronto, but the rise of interest rates to 20% in the early 1980’s made us begin to look for less expensive housing outside of the city.  As a result, we moved to Innisfil in 1981, having bought a wonderful heritage house on a beautiful 4 acres in the middle of farming country.  The location was not ideal as I was still teaching at Oakwood in Toronto – so for the next 17 years I made the one-and-a-half-hour trek south every day via car, GO bus, subway and streetcar, and back again at night.  However, we were so enchanted with Innisfil – with its rolling farm land interspersed with small villages and lovely old houses, that it was worth it, and we never regretted the decision.

Since arriving in this community, Candace joined the WI and, as an avid gardener, became a member of the local garden clubs and for years opened our acreage to garden tours.  On retirement, my interest in history and art led me first to becoming a docent in the Barrie Art Gallery, and later to wondering why our 1864 Georgian style house did not have a plaque on it as the similar building that housed the McLaren Art Gallery in Barrie did.  So, I became involved with the Innisfil Heritage Committee which had just got going in 2007.  For ten years I was involved with the Heritage Committee and became its chairman in 2015.  During that time we managed to have three other Innisfil buildings designated: The Knock School House on the 10th Side Road was already designated, but it was followed by our house “The Rogerson House”, a fine red brick Georgian style building on the 3rd Line, then a similar Georgian building on the 6th Line, and finally the stone “Cross House” at the corner of the 20th Side Road and the 7th Line.  In addition, the town undertook the designating of Cookstown as a Heritage Conservation District and I sat on the organizing committee.  A program to place information plaques at various important locations within the town was undertaken.  In addition, I was instrumental in setting up the Simcoe County Branch of the ACO (the Architectural Conservancy of Ontario) and become its chairperson.  I was also involved in the planning of the annual Heritage Conference in Midland in 2013.

I like to believe that as a result of these efforts, the consciousness of the significance of preserving our heritage buildings has been raised in Innisfil.

Innisfil, “the country above the city” had become [my] home and [I] would never consider leaving it.

David was able to stay in the home and community he loved until February 18st when he was moved to Hospice Simcoe for the final days of his life.  We are eternally grateful to the staff and team of volunteers there for their compassion and sympathy.  As per David’s wishes, there will be no formal funeral service, but a Celebration of Life will be held at his home in the spring.

If you wish, donations to Hospice Simcoe https://www.hospicesimcoe.ca/donating in the name of David Steele, would be greatly appreciated by the family.