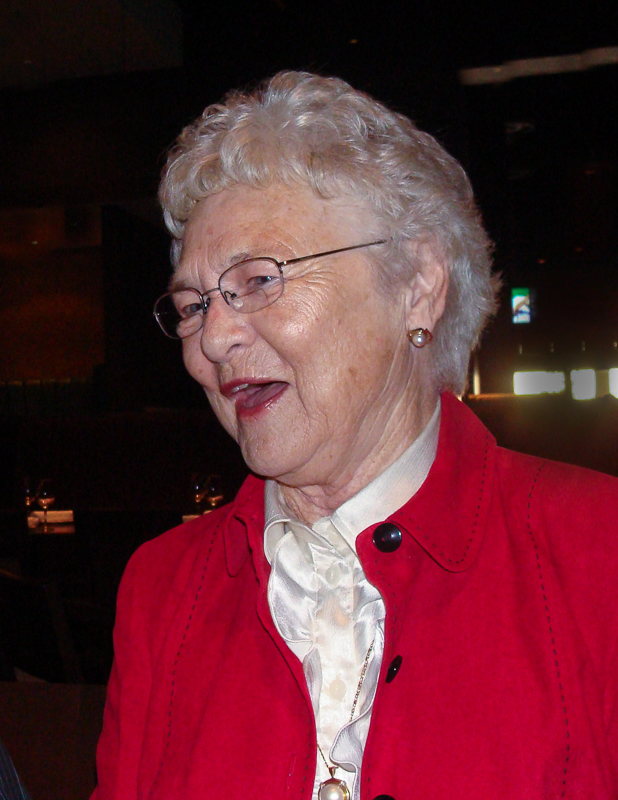 Eva Elizabeth [Bunny] Ibbotson (nee Theiss) was born in Toronto on January 1, 1931, and was the beautiful daughter of Joseph and Elizabeth (nee Mayer) Theiss.

Bunny met Robert George Ellwood [Bud] Ibbotson on a blind date arranged by their good friends Bob and Fern. It was love at first sight, and after only a year of courtship they married on September 24, 1949.

After years of raising their three children; Brett, Brenda and Jeffrey, Bunny returned to the workforce, working at the University of Toronto’s, Institute of Aerospace Studies. She later worked for the Toronto School Board, at Topcliff Public School.

Bunny and Bud created lifelong friendships with many members of the Willowdale United Church Couples Club. They were actively involved in dinner theater nights and camping trips, and a smaller group of them later formed the ad hoc dinner group, the Fish & Chippers.

There were many camping vacations with her young family, and several trips within Canada after her children left home. Retirement gave Bunny and Bud extra time to travel, and they enjoyed amazing experiences in Newfoundland, Alaska, Spain, Morocco, England and the U.S.A.

After living on Fisherville Road in North York for more than 40 years, Bunny and Bud moved to Monkman Court in Aurora, where they enjoyed another 20 years with wonderful neighbours there.

In 2018 they moved to Hollandview Trail Retirement Residence and continued to share their lives with new friends.

Sadly, Bunny passed away peacefully on Sunday June 21, 2020 with her loving family by her side.

She will be missed by her husband Bud, her children; Brett (Debra), Brenda (Grant), Jeffrey (Cheryl), her grandchildren, Justin, Kristopher (Dominique), Darcy (Lianne) and her great grandson Wyatt.

The family wish to express “Thanks” to the many Doctors, Nurses and caring staff at Southlake Regional Health Centre, the Palliative care team from S.R.T. MedStaff, Staff from Central LHIN, and especially all the incredibly caring staff from Hollandview Trail Retirement Residence.

Donations can be made to Diabetes Canada.

Arrangements Entrusted to Peaceful Transition York and condolences may be forwarded to the family through peacefultransition.ca