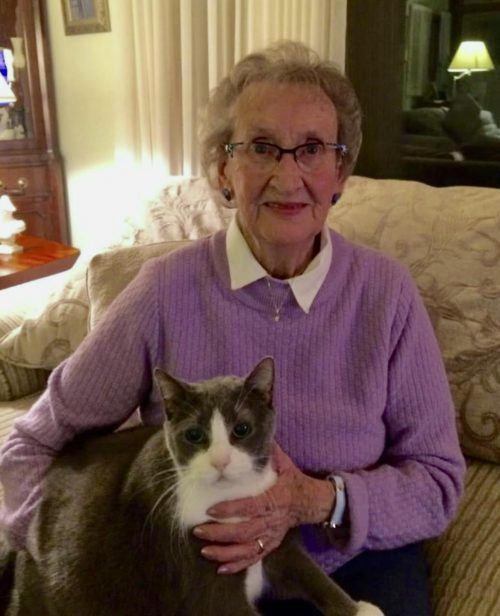 Passed away peacefully at home in Gilford, Ontario on June 14, 2022 at 95 years of age in the presence of her son Evan after a brief struggle with pancreatic cancer.

Gladys was born in Burlington in October 1926, the youngest of three children born to Herbert and Harriet White.  Gladys grew up with a desire to fly in airplanes and graduated from the nursing program at Hamilton General Hospital in order to qualify for training as a stewardess with Trans Canada Airlines after she had turned 21.  Gladys flew with TCA for a few years crossing Canada and points in the northern USA including New York and Chicago until she met and married Innes in 1951.  In 1952, their first child James (Jim) was born and was followed by Carol in 1954 and Evan in 1956.

Gladys returned to work as a registered nurse in 1963 at Niagara General Hospital while the family was living in Niagara Falls.  She continued her nursing career when the family moved to Windsor in 1964 and then on to Etobicoke where she joined the team of nurses on the psychiatric unit at Humber Memorial Hospital where she developed a life-long friendship with her nursing colleague Marie Markwick.  Together, they had many work and travelling adventures that took them to several places including England, Ireland, Italy, Greece and the Middle East including a year working as nurses in a newly constructed hospital in Dubai in the United Arab Emirates in 1980.  They were briefly joined by Innes and Marie’s husband Bill who had been required to formally give permission for their wives to work in the UAE as that was a requirement at the time.

After returning home from that adventure, Gladys resumed her nursing career at York County Hospital in Newmarket and moved to Gilford with Innes in 1984.  Unfortunately, Innes was diagnosed with cancer in early 1985 and passed away late that year.  Gladys continued to work until retiring in 1990 but never lost her love of travel and was able to say that she had visited 37 countries around the world by the time she reached her nineties.

Gladys was active on the internet, loved to play scrabble and bridge in-person and online and remained very interested in news events both local and international until her passing.  She was vital and ‘with it’ until her final days and will be missed greatly by Jim (Darla), Carol and Evan, her grandchildren, Katie, Brooke, Erin and Michael and great grandchildren, Ryker and Rayne.

A Celebration of Life will be held for close family members and a few close friends.  Donations in memory can be made to the Canadian Cancer Society.  Online condolences may be made at www.peacefultransition.ca