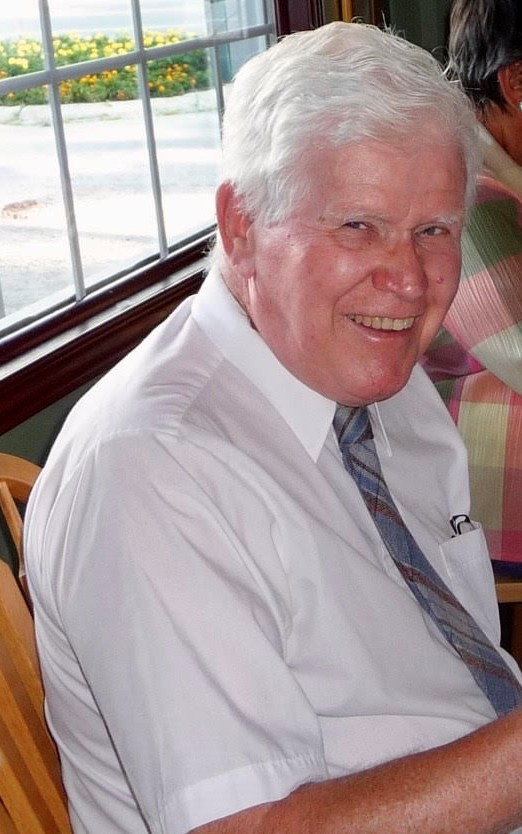 Kirk Thornton died peacefully on August 30th in Orillia, Ontario at the age of 92. He is remembered by his children, Kathy Wray (Howard) Barb Thornton, Trish Thornton, Bob Thornton (Lois), his grandchildren Jason and Kelly Wray (Ken Taniguchi), Chris and Andrew Foster, Ellen and Hannah Thornton. He is survived by his wife, Mary Thornton, sister, Sally Thornton, and his cousins Ted Mullet and Alice Lundon.

Kirk was born in Galt “don’t call it Cambridge!” Ontario in 1930. He met his future wife, Mary Page while they were both attending Victoria College at the University of Toronto. Kirk became a banker at the Canadian Imperial Bank of Commerce, and through his career worked in many cities… Toronto, Ottawa, Chatham, Orillia, North Bay… giving his wife and children a whirlwind journey through Ontario. They chose to retire in Orillia, the favourite of all their stops.

But Kirk was more than a banker. He loved swing and big band music. He saw Duke Ellington, Ella Fitzgerald, Dizzy Gillespie and more. He and Mary enjoyed all sorts of music and travel that took them all over the world.

Kirk cared about his community deeply. He delivered Meals on Wheels for years. He and Mary volunteered at Orillia public schools to help the young kids with their reading. He used to drive cancer patients down to Toronto for treatments. He was President of the Orillia Kiwanis Club for a time, making the yearly Music Festival his priority.

Everyone who knew Kirk agreed that he was a gentleman, and also a grammar-man. Dinner table discussions were usually about the incorrect usage of “hopefully,” or “lay vs. lie.” People who misspelled “Thornton” by leaving out the middle “n” were the bane of his existence. “No, it’s not a silent n!” Something he passed on to his children and grandchildren.

And then there was the cottage on Butterfly Lake. Kirk loved seeing all his children and grandchildren enjoy the BBQs, the games of euchre, and the music nights in the Screaming Veranda. Every morning he would paddle across the lake to the general store to pick up the Globe and Mail because he and Mary were cryptic crossword fanatics. The cottage, the family and the friends he welcomed made every summer special.

Thanks to all the people at the Leacock Lodge and LTC Home who took good care of Kirk. There will be a gathering sometime in the next few months to celebrate Kirk’s life